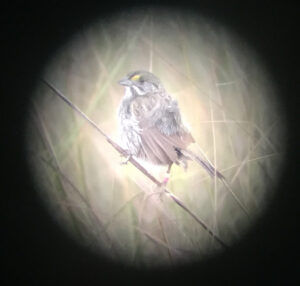 A male Cape Sable Seaside Sparrow through the lens of a spotting scope.

I worked with Seaside sparrows in New Jersey saltmarshes before my job with Ecostudies on the Cape Sable Seaside Sparrow project. There are several key differences between this current technician job and the work I did in the past, most notably the habitat. The Cape Sable Seaside Sparrow (CSSS), a subspecies of the Seaside Sparrow, is present only in the prairies of the Florida Everglades, The Everglades offer a unique environment, and it is interesting to think about the adaptability of species in terms of the different habitats members of the same species can live in.

Another significant difference between the two populations is their numbers.  While The CSSS is considered endangered, the Seaside sparrow is listed as a species of least concern. While lower population numbers are not good for the species (or subspecies) as a whole, it does enable us to focus on individual birds. We can give each bird a unique color band that identifies it as an individual, and we can also become more familiar with each individual bird’s territory, particularly the males.  Re-sighting birds is one way that we keep track of them—their territories, nests, and mates.

A day in the field re-sighting consists of finding a bird, usually a male that is perched high in the grass singing, and getting a clear view of the unique combination of bands on its legs. We use spotting scopes and our binoculars to get a good view of the sparrow, and we record where and when we saw the bird with our GPS units and in our field notebooks.

By re-sighting the sparrows, we are able to keep track of which birds are on our study plots, which are paired, and which are nesting.

By Katharine Lewis|April 28th, 2016|News|Comments Off on Re-sighting Sparrows