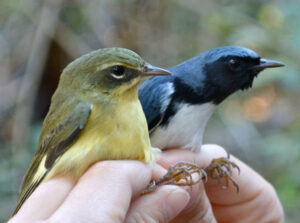 I run a banding station to monitor fall migration in the Miami area during the off-season when I am not working with Ecostudies Institute on the Cape Sable seaside sparrow project. Here is a gallery of some of the birds we have banded in the last 13 years. 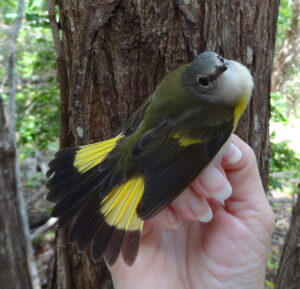 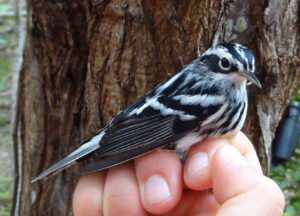 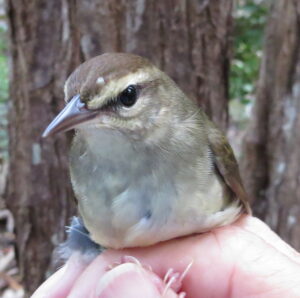 And then the rare: 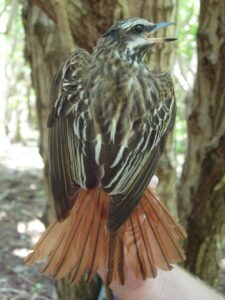 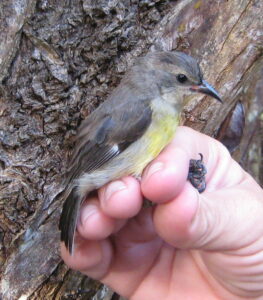 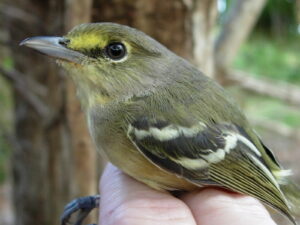 The Cape Florida Banding Station’s (CFBS) location close to the bottom of the Florida peninsula puts us in a unique position to monitor the migration of species that are heading to the islands of the Caribbean to winter. Birds here are preparing for a long overwater crossing that could last up to 24 hours, depending on the final destination. These birds need to have fat reserves to fuel the flight. Most individuals have acquired the fat prior to arrival at our latitude and will pass over us on their way without stopping. However, storms and other weather events can force thousands of migrants to land anywhere they can. It is at these times that the value of high-quality ‘stopover’ habitat becomes apparent. Songbirds need appropriate cover from predators such as hawks and feral cats, and also enough insect and plant food to be able to maintain or restore their fat deposits. Native subtropical vegetation is the best provider of food resources in our area, and the fruit of certain trees such as Ficus aurea is especially important.

Several things stand out in the CFBS data from the last 13 years when put in a larger context. We band a greater proportion of certain species than other stations farther north; the Swainson’s warbler being a good example. This species is widespread across the southeastern US but is not very common anywhere. A large percentage of the individuals of this species pass through south Florida in migration, and although Swainson’s warbler is not globally threatened, it has been declared a high priority species of conservation concern by the USFWS. Neotropical migrants are especially vulnerable to threats that occur during any concentration points during their migration and wintering cycles. The destruction of one single important stopover or wintering location can have huge implications for the survival of the species.

Banding data are most useful as a snapshot of the condition of birds at a particular moment in time, but sometimes additional data are gleaned when banded birds get recovered elsewhere. We catch a respectable amount of birds banded elsewhere due to our position in fall downstream of most of the other Eastern US and Canadian banding stations, and our banded birds have turned up in other locations. One of the more memorable encounters was of a Gray catbird colorbanded by Canadian researchers working on a project in Cuba; we recaptured it 3.5 years later heading north in spring, with all of its color bands still intact!

This station also offers opportunities to promote an interest and awareness in conservation of habitat and species in a young city comprised largely of immigrants from elsewhere in the US and Latin America. Helping to build a conservation ethic among (in particular) the next generation and encouraging a connectedness with local native habitats are two of our more important long-term goals.

By Michelle Davis|October 6th, 2015|News|Comments Off on More on Fall Migration in South Florida