Everglades National Park from Above

Everglades National Park from Above 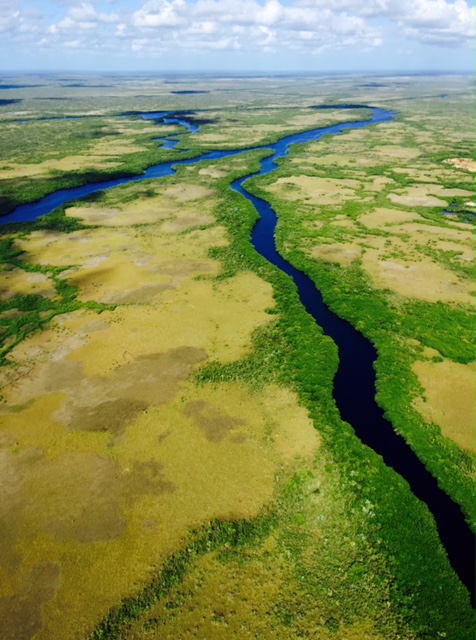 Today I was in the right place at the right time. I spent the early morning hours assisting Everglades National Park with their range-wide Cape Sable seaside sparrow helicopter surveys, which involves flying researchers out to marl prairie sites, dropping them off to conduct a standardized point count survey, and picking them up to bring them to the next survey site. Lots of up and down in a helicopter. The surveys themselves are not part of our research here at Ecostudies, but they provide a long-term dataset that we will be analyzing as part of our own sparrow research. The Park needed some help today, and I’ve been wanting to participate for some time to see their methods first hand. That alone made today a very productive and fun day in the field. But the fun didn’t end there…

After the surveys, which were cut a bit short due to high winds (singing sparrows are hard to detect in high wind), I was invited to help out with some waterbird surveys as well. This meant a free helicopter trip around Everglades National Park! I jumped at the chance to see more of the Park from the air because we ordinarily only see a small fraction of it while flying to our more remote study site.

The experience was more than just a fun trip in a helicopter. I feel like I gained a much greater appreciation for the vastness of this wilderness that exists just miles from metropolitan Miami. It really is amazing how much wilderness there is in this spectacular National Park! I also had a chance to learn about a lot of ecological issues in the Park besides the things I’ve learned working in the marl prairies studying the Cape Sable seaside sparrow. Another perk was that I got to see how severely dry the entire ecosystem is right now…much of the brown in this photo should be green by this time of the year. We’ve observed this on our study plots this year, but this flight let me see it on an entirely different scale.

Thanks to the folks at Everglades National Park for letting me tag along today!

By Tom Virzi|May 26th, 2015|News|Comments Off on Everglades National Park from Above