The dry prairies of central Florida are one of the most threatened ecosystems in the United States with much of the historic extent having been converted to orange groves and cattle pastures over the past century. This has resulted in a fragmented landscape with few remaining large patches of highly-suitable dry prairie habitat remaining. With a distribution restricted entirely to these rapidly diminishing prairies, the Florida grasshopper sparrow (Ammodrammos savannarum floridanus) is one of the most critically-endangered birds in North America. This subspecies is currently protected by the Endangered Species Act, but populations in the wild are so small the threat of extinction is real. At present there may be fewer than 150 individuals remaining in the wild. Conservation efforts center around acquiring, protecting and restoring critical habitat and finding ways to reestablish populations in areas formerly occupied by the sparrow. 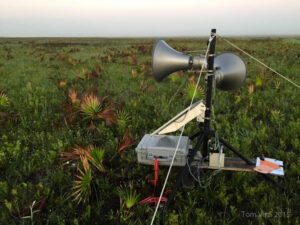 In 2015, Ecostudies Institute began studying the Florida grasshopper sparrow contributing towards the ongoing conservation efforts to keep this subspecies from extinction. Our efforts included an attempt to reestablish populations at Kissimmee Prairie Preserve State Park through the use of artificial song playback to attract sparrows to formerly occupied breeding habitat. As part of our experiment, we also tested the use of remote recorders as a monitoring method to detect singing male sparrows.

In 2016, we conducted follow-up surveys to see if any sparrows settled in our study sites, perhaps in response to our song playback from the year before. Presently, Ecostudies continues to participate in recovery efforts by analyzing long-term survey data from the Kissimmee Prairie Preserve State Park in an attempt to identify factors that led to the large population decline.

Find out more about the Florida grasshopper sparrow here.

Below we report some key findings from our conspecific attraction experiment with Florida grasshopper sparrows in Kissimmee Prairie Preserve State Park. In 2015, we established two study plots in areas with suitable prairie habitat formerly occupied by Florida grasshopper sparrows. We deployed two playback units to broadcast conspecific song in an attempt to attract sparrows to these unoccupied prairie units to breed. In 2016, we conducted additional surveys (ground surveys and remote recordings) to determine if sparrows settled in areas where song playback was broadcast in the previous breeding season.