Wildlife reintroductions have become an important conservation tool around the world. Conservation practitioners turn to reintroduction when the factors that led to a species’ extirpation have been eliminated or reduced, yet natural recolonization does not occur.

Although substantial progress has been made in the field of reintroduction biology, significant information gaps remain. For example, most avian reintroductions have focused on raptor and game birds; passerine reintroductions are rare, in part because most species are short-lived and potentially more vulnerable to stress in captive situations. 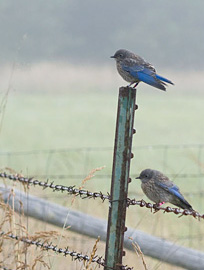 Reintroduction of Western Bluebirds to oak-prairie habitats in Pacific Northwest

In 2007, Ecostudies Institute, with many U.S. and international partners, initiated a program to return the migratory Western Bluebirds to the Pacific Northwest. Western Bluebirds were a common inhabitant in oak-prairie habitats throughout the region, until habitat loss in the mid-1900s caused large scale declines and extirpations. Our initial effort started on San Juan Island, but has since expanded to include Vancouver Island, Canada.