One of the joys of working in the Pacific Northwest is the opportunity to work with other enthusiastic bird nerds. When I explain to laypeople that I work with birds, I am mostly met with confusion or, better yet, the “Can You Identify This Bird Based On Vague Descriptions” game. But there is a special breed of people who, like me, enjoy watching swallows cut and weave through the air and identifying them by their iridescent plumage. I have lived and worked in several other states across the US and have yet to find such a welcoming and delightful community of binocular-toting, bird-book-reading individuals anywhere else.

Observe: a flock of bird nerds in their native habitat. Note the universal appearance of ocular devises, the outdoor “plumage” and the serious expressions!

As part of our assessment of avian responses to estuary restoration, Ecostudies Institute has reached out to community to help us achieve our goals. They represent a valuable font of information and many are intimately familiar with the Leque Island study site. As a result of their efforts, I am delighted to say that the 2016 bird surveys have been an unqualified success thanks to these dedicated volunteers.

In April, I had the very great privilege of leading the first Citizen Science Leque Island Bird Surveys with Gary Slater and biologists from the Department of Fish and Wildlife (WDFW).  This is the first time a program quite like this has been attempted at Leque Island. We intended to build a project that would augment our own surveys and generate data about the species composition and abundance during the breeding season. 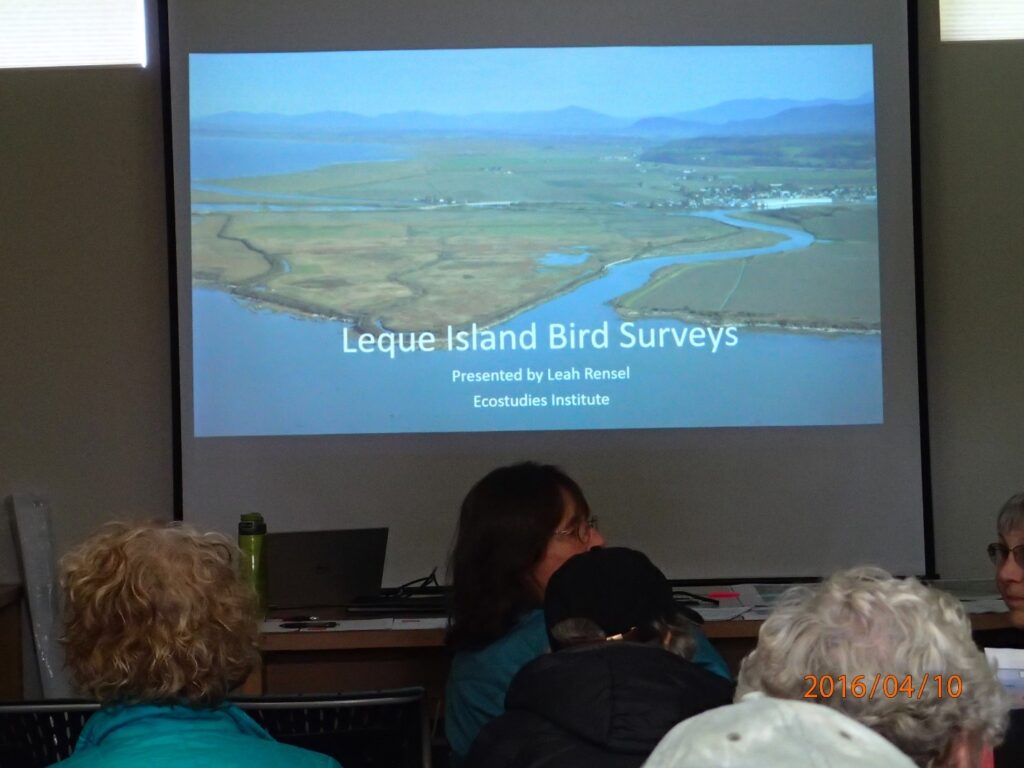 This is the time of year when migration is in full swing and everybody from the marsh wrens in the estuaries to the mallards in the bushes are displaying to mates, building nests and carefully tending to tiny offspring. It’s a busy season and I needed all the help I could get. So we asked volunteers to pick sections of Leque Island and patrol for a set amount of time, writing down all the birds they encountered. 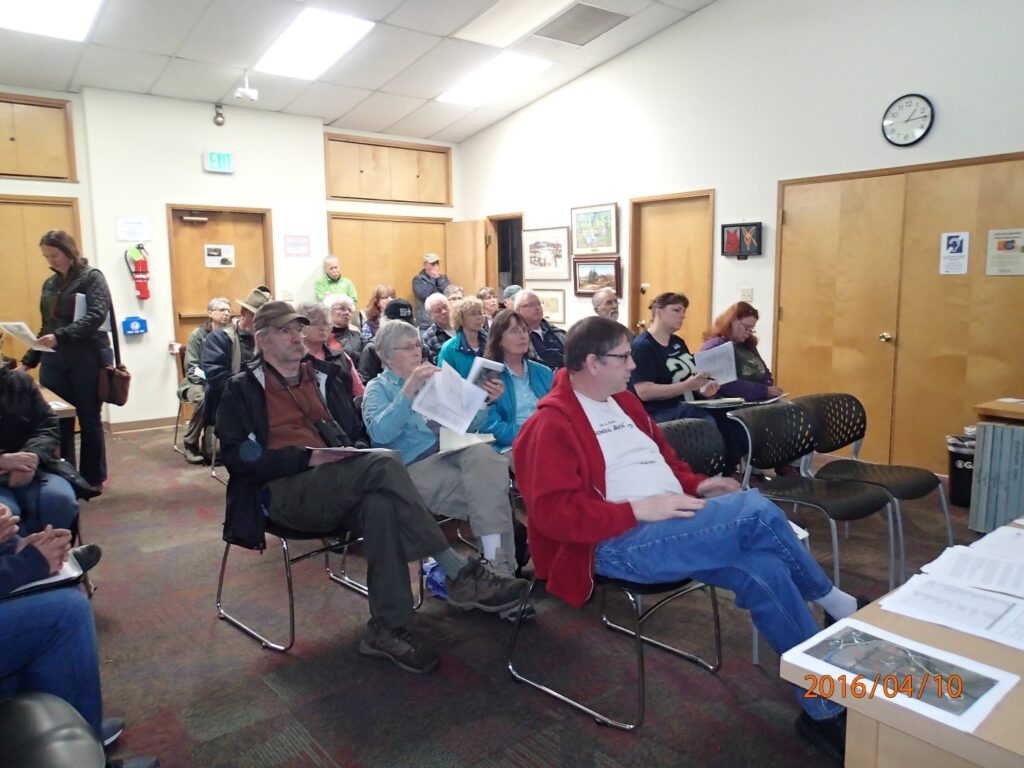 The orientation training occurred on a beautifully blue sky spring day, when the tree swallows soared over our heads in pursuit of a tasty insect lunch. I had an absolutely blast, comparing bird sightings and discussing species ranges with the 15+ people who graciously took a few hours out of their Sunday to help us. There were some hiccups; I have yet to hear of a pilot project that transitioned easily from paper to the field. But, in the end, we adjusted smoothly and made notes for next time. 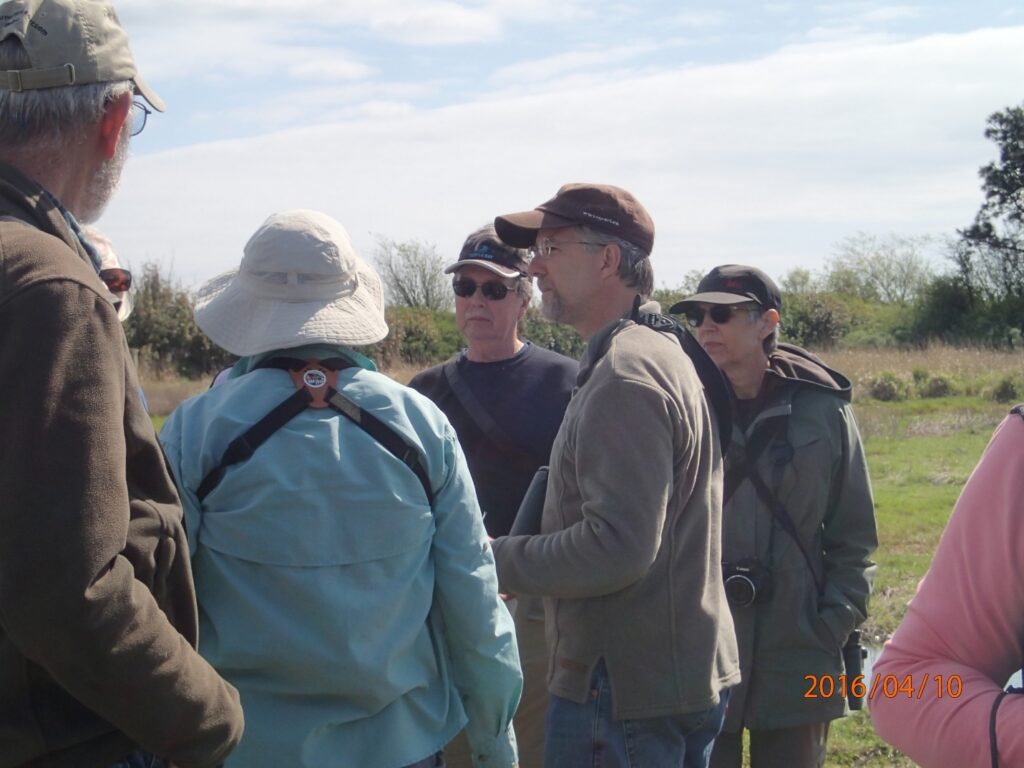 Gary Slater (center) explains to Leque volunteers about the survey methods they will be using during this breeding season.

I’ve since run into several volunteers out at Leque Island when our surveys overlap. This is Linda Cline and Jim Carr, who are identifying a raptor flying overhead: 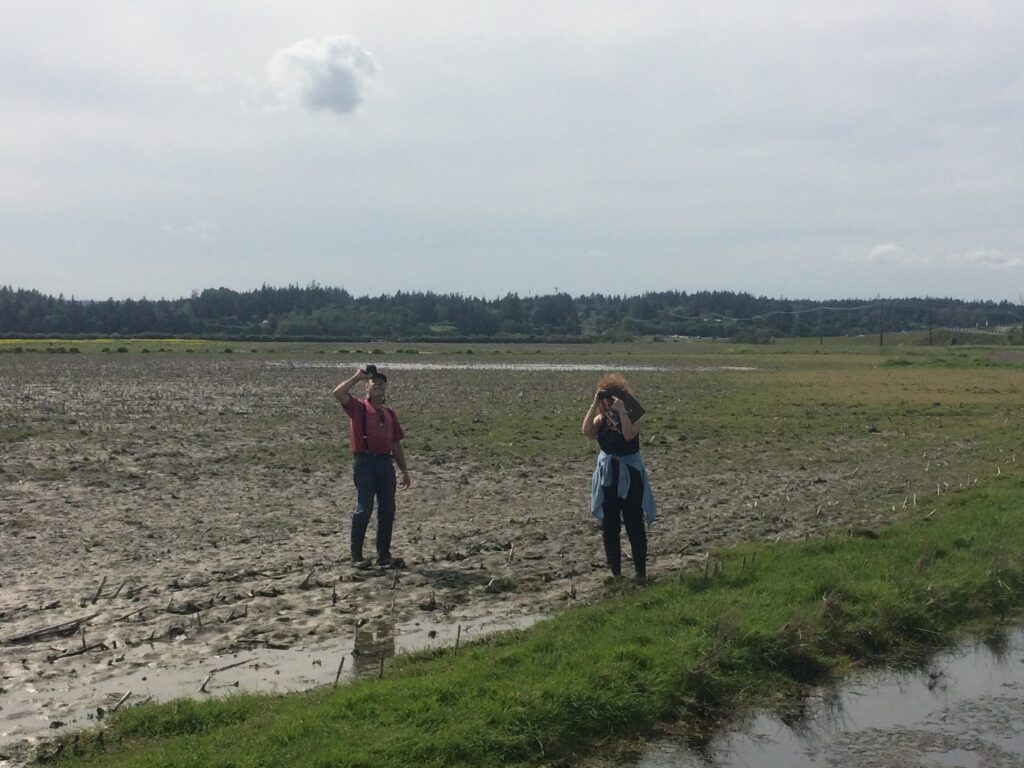 So thank you to our outstanding volunteers! Your contribution and dedication to conserving avian wildlife is sincerely appreciated. My job is a fairly solitary one; for the most part I work alone, counting birds and collecting data by myself. It was a joy to have your help and company while we work together to help our feathery friends. With people as passionate about conservation as you are, I have hope that future generations can enjoy what we have the privilege of seeing every day.

A special thanks to the members of the Pilchuck and Skagit Audubons who participated in the project and helped us get the word out about this program. Thank you also to the Stanwood Library, who graciously allowed us to use their meeting room. And finally, thank you to the WDFW staff members who helped educate us on the intricacies of the estuary restoration process: Ruth Milner, Belinda Johnson and Loren Brokaw.

By Leah Rensel|May 3rd, 2016|Estuary Restoration Project, News|Comments Off on A Shout-out to Our Volunteers and Fellow Bird Nerds on the Leque Island Study Site