Sometimes fire or rain will impede the Cape Sable Seaside Sparrow crew from working in the field. The wildfire that occurred during the first weeks of the field season meant we ended up working on a Saturday. I headed to Everglades National Park and spent my usual day off in the field.

I stopped at every lookout point on the road, the trails on the West side of the road, and two on the East. A skill we use during our surveys is distance estimations. I did not have much practice with working in meters or estimating distance from past projects I have been a part of. I had taken one of the projects range finders to verify that I was estimating within 10% accuracy. 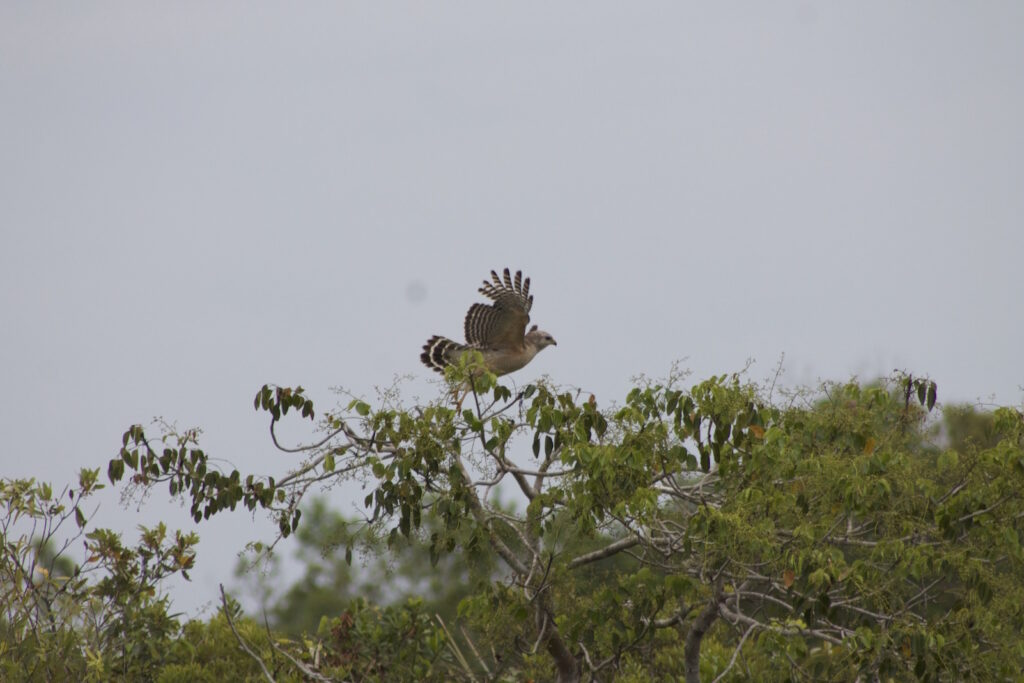 At my second stop along Main Park Road, there were cypress trees and hammocks in the background to estimate distance for. I heard chirping behind me and estimated its distance, but was never able to find the bird. I estimated the distance of crows that were calling from the other side of the hammocks, and as some flew out I used the range finder and at least knew they were further or near that distance. I also heard two red shouldered hawks calling to my left and right. Eventually one flew onto the cypress tree, and I estimated its distance and decided to spend some time photographing it while estimating distance for the all the trees at this stop. When the hawk flew out of sight, it was time for me to head to my next stop.

The photo above is from the overlook at the Pa-Hay-Okee (translates into grassy river) Trail. There were plenty of crows to estimate distance for. So far, I had been doing well as long as the object I focused on was less than 150 m away. Any tree further than 200 m, and I would be 100 m above or below.

During my time at the overlook, I talked to some fellow scientists. I met Steve Lee from Ohio. We both had worked in restoration of wetlands and dedicated efforts to developing citizen science projects for these restorations. There were three other scientists that were working in Louisiana with Fish and Wildlife Conservation. They were interested in the walking conditions I had to face in the Everglades. I told them about pinnacle rocks and they were thankful they did not have to face that at their site. However, we had all walked through ankle-deep or higher water for our projects. 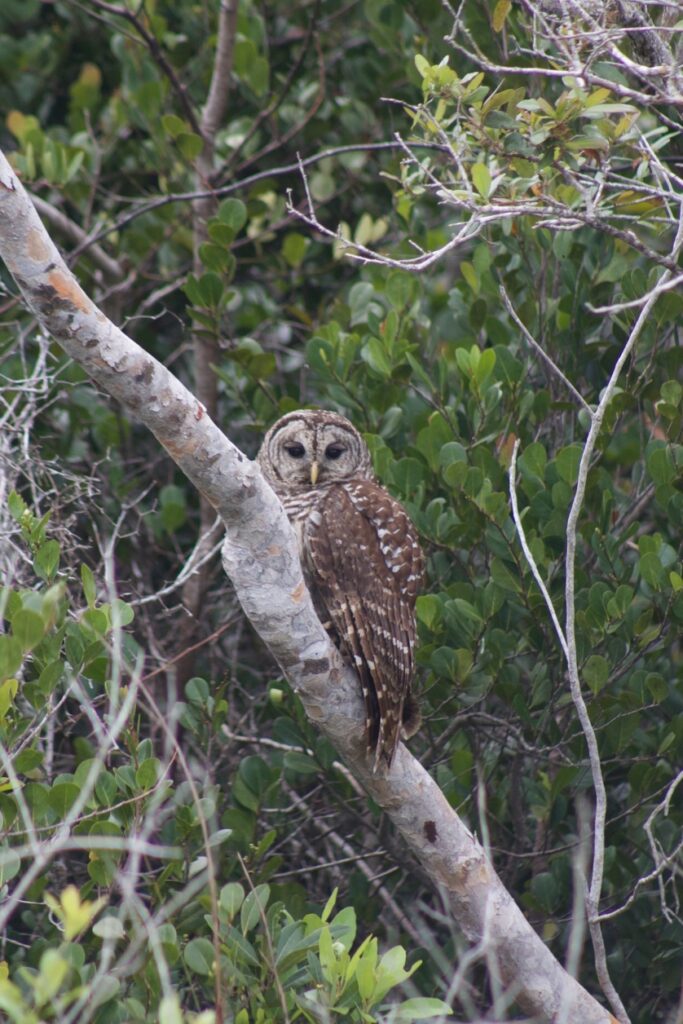 My next stop was Mahogany Hammock where I got to see my first barred owl. I only heard it calling after I had walked around the whole trail. I heard the hoots coming from the entrance and searched within the hardwood hammock. I slowly walked out into the open trail again. I heard a red shouldered hawk, and then saw it fly away from the hammock. Then I heard leaves rustle and when I turned around the barred owl above flew above the trail and into the tree. I whispered to the people who had also been looking for the owl and saw their eyes grow big as they realized we finally found it. It stayed there for a while as everyone got photographs of it.

My last stop before going home was West Lake trail. It went through mangrove habitat. I had no luck finding birds. It was also a limiting place to do distance estimations so, I just enjoyed my view. There was an alligator to the left of the pier above and coots to the right, but you would miss them if you did not have binoculars.

It was a beautiful day and a nice ending for my “day off.”